First taste of real work and sweating in an ad factory. 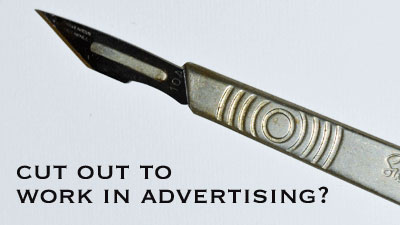 Student life cannot go on for ever and work experience seemed a logical stepping stone.

I had played around local folk clubs and found that people from the Manchester advertising scene were very well represented in that particular community. I approached a few people, asking which were the leading companies and who should I speak to. There were three names that kept coming up: Bowden, Dyble and Hayes, Osborne Peacock (where the flamboyant Peter Marsh began his career in 1957) and Cross-Courteney – as I knew a handful of people at the latter, I wrote to the creative director in search of a placement.

It was not quite the glamorous world I expected. The studio was a large ‘L’-shaped room that was practically an ad production line. Visuals or ‘scamps’ were produced to show clients how their ads would appear and these, once approved, together with the typewritten copy, were passed to the studio manager whose desk was at the top of the ‘L’. These progressed to the ‘finished artists’, incredibly neat people who would create the visual elements, borders and illustrations, drawing them in crisp black ink on white board. As I had indicated my interest in typography, I was placed under the watchful eye of the typographer, or ‘typo’. We were near the end of the process, so occupied the foot of the ‘L’. Our job was a mixture of aesthetics, technical knowledge and arithmetic. The text or ‘copy’ for the ads was supplied in typewritten form. We had to specify the font, type size and leading (inter-line spacing) to fit the copy into the space available to it, in as attractive and readable manner as possible. This required ‘casting off’ the copy – first counting the number of characters, then using a cast off table for the specific font to calculate the number of lines of type it would make in various sizes. Once the type had been specified it was sent off to a typesetting house who would set the text in type, ink it up and supply what was known as a repro proof, a high quality print which then came back into the production line. The typos then read and checked the copy for literals.

The repro went back to the paste-up artists. These skilled people assembled the ad by pasting the text into the artwork created by the finished artists, together with any photographs, logos or other elements. Finally, back came the complete artwork to us at the typos’ desk to check. Then we opened a hatch in the wall and passed it through into the production department who sent it off either for blocks to be made or delivered it direct to the publication.

Time after time, ad after ad passed through the ‘L’. I looked at the people seated at the rows of tables and drawing boards. Many were design graduates from my college, now grinding out ads as they had already done for a number years, with the prospect of doing something similar into the foreseeable future. I watched Bob, the studio manager – in his early fifties, he habitually wore a white duster coat making him look like a balding butcher. If this was the career progression, I was fast coming to the conclusion it was not for me.