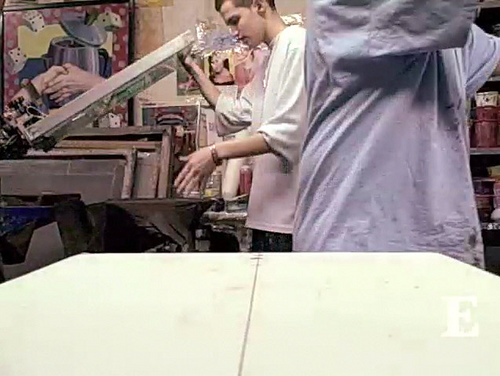 Pete was less lucky when it came to time. Nobody had seen him for weeks, but that was common. He would work at home in a nervous frenzy and then turn up at the last moment with a stunning and totally original solution to each project.

We were both in the upper quartile so far as grades were concerned and there was some vigorous competition. I admitted to myself that Pete probably shaded me in originality. My work was more contrived and derivative. However, on the day when I was reprinting my covers, spelled correctly now, Pete launched himself into the print room like a whirlwind, with bulging folder of materials. He threw his coat on a chair and elbowed a workspace. We rarely saw Pete in the print room, he preferred other media to finalize his designs. The care and precision needed did not sit well with his hyperactive temperament. I looked with interest at his project.  His subject was an aspect of filmmaking and he had created landscape pages to mirror cinema screen format. He would intersperse the pages with leaves of clear acetate overprinted with black designs to emulate film frames with sprocket holes.

He laid out his first sheet, hands shaking and ash falling from his cigarette onto the page. Quickly laying his screen on the top he pulled the first black print.

‘Bugger!’ As he lifted the screen we saw paint had run under the stencil and smeared the acetate. Frantically, he threw the ruined sheet to one side, rubbed the screen clean with solvent and took another sheet of the expensive acetate. This one printed perfectly and he ploughed on demonically until one of the metal drying frames was full of acetate sheets, shiny with fresh black ink. He rushed to one of the big Belfast sinks to clean his screens.

‘Pete, I think you’d better come and look at this,’ a girl called from by the drying rack. Pete walked over as we all turned to look at the rack. The smooth, flat acetate sheets were now bending and undulating like sand-dunes. He had been using a cellulose based paint that seemed to be reacting with the clear film, shrinking and buckling it as it dried. Pete just stood, silent, shocked and near to tears. Those of us nearest to him were wracking our brains for possible solutions, and blurting out ill-considered reassurance. Pete just grabbed his coat and left the room as rapidly as he had arrived.